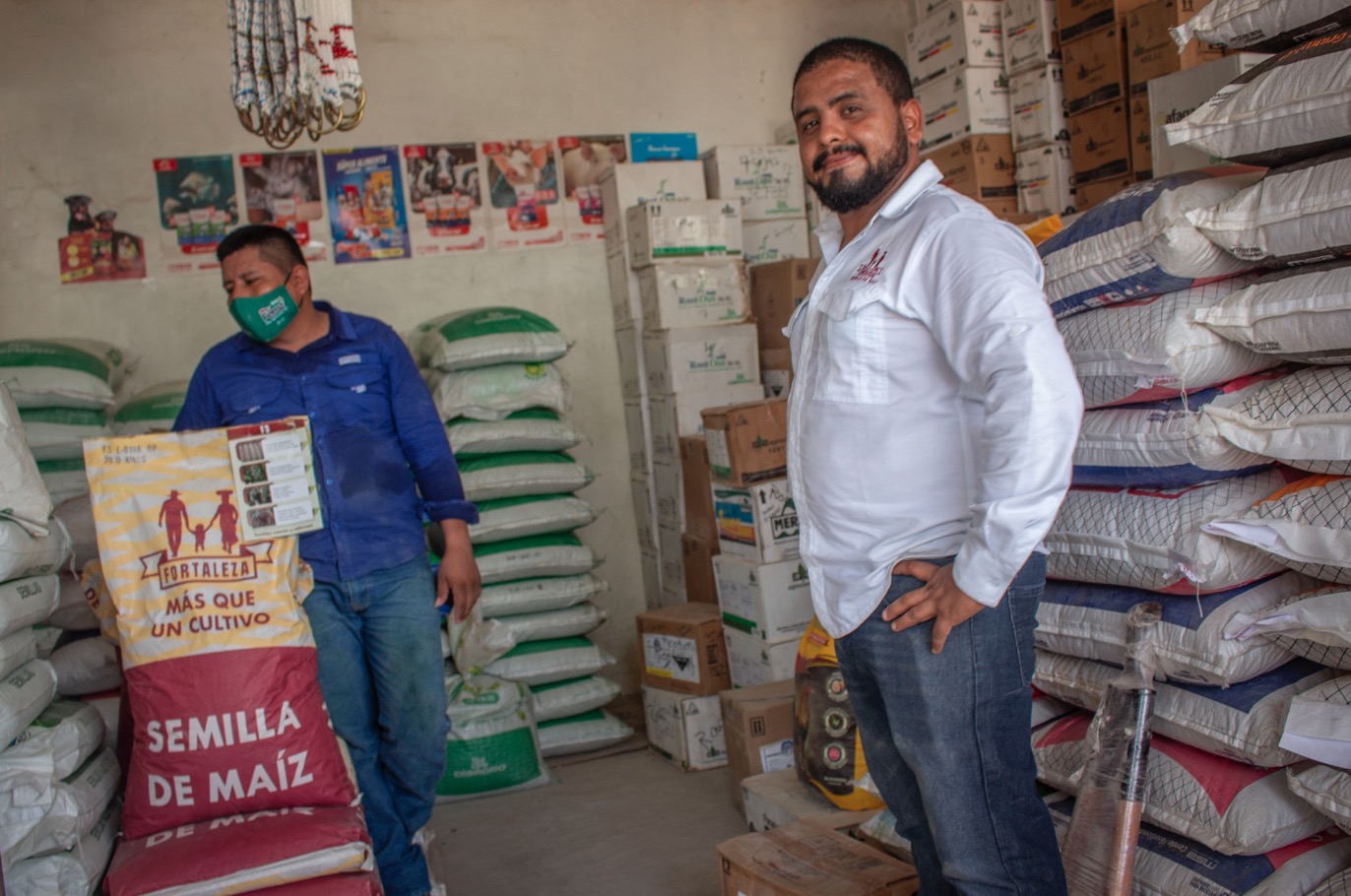 Nelson, like many farmers in Guatemala, has been growing corn since before he can remember. He now applies over 20 years of experience in the fields to helping other farmers grow Semilla Nueva’s more nutritious corn. Nelson has been a valued member of our team since the launch of the F3 Fortaleza seed in 2017, first aiding in the market study for Petén and then planting the first experimental parcels in the department.

Now, four years later, Nelson and six other field technicians, stationed in different departments throughout Guatemala, are the face of Semilla Nueva, directly supporting the smallholder farmers in their respective regions. On any given day, you can find Nelson tending to a demonstration or experimental parcel, training farmers in improved agricultural techniques, or visiting agrodealers. Nelson’s workday often starts as early as 4:30 am or 5:00 am, to account for the long distances one must travel from farmer to farmer and agrodealer to agrodealer in Petén.

Petén is the largest, northernmost department of Guatemala, home to lush rainforests and striking Mayan ruins, but also one of the departments most affected by Hurricanes Eta and Iota in 2020—and where nearly one third (32%) of households have a family member that has crossed the border in search of a better life.

In communities of Petén like Mario Mendez and Roto Viejo, separated from Mexico only by river, corn is the basic means of subsistence. When hurricanes Eta and Iota struck in November of last year, flooding this river and spilling over into farmers’ fields, corn harvests were destroyed and many farming families incurred serious debts. To make matters worse, the COVID-19 restrictions had already left many farmers without a secondary source of income to lessen the blow of their lost harvests. Farmers that were fortunate enough to salvage their harvests, unfortunately, were forced to sell their corn for half of the typical market value.

Now, eight months later, Peteneros are still recovering from the combined economic aftermath of the hurricanes and pandemic—and Nelson is working tirelessly every day to help alleviate this economic burden for farmers.

Farmers in Mario Mendez, like Don Byron, planted extra corn this year hoping to make up for the economic losses incurred during 2020. When first asked why he purchased our Fortaleza F3 seed, he jokingly credited Nelson’s “buena casaca”—or his charm. He later added, “Fortaleza is very good corn, and it is affordable. My wife loves the F3 tortillas.” Nelson and Don Byron go way back: in 2018, Nelson worked alongside Don Byron to plant a F3 experimental parcel in his fields. From then on, he always bought a bag of F3, until this year, when he bought a few more bags, enough to fill ¾ of his land with our nutritious corn. “I hope to make up for last year and what I lost during the pandemic,” Don Byron explains.

Farther south along the same river that borders Don Byron’s fields, in the community of Roto Viejo, Don Francisco planted our Fortaleza F3 seed at the end of a long, dirt road for the second time this year. Like Don Byron, he participated in the early stages of Semilla Nueva’s commercial sales, working with Nelson to host experimental and demonstration parcels since 2018—and he has remained a loyal customer ever since. Though he too lost his harvest last year when the water level reached the height of his kitchen window.

One day, after visiting Don Francisco, Nelson was heading home, down the same long, dirt road, when he recognized the corn on the side of the road, and pulled his car over to meet newlyweds Daring and Ricardo. Ricardo bought our Fortaleza F3 seed for the first-time last year at his local agrodealer and planted an acre and a half in December. From then on, Nelson provided Ricardo with tips and instructions to improve the performance of his F3.

Following the hurricanes, the region experienced little rainfall. “The climate has changed for the worse, but F3 withstands,” says Ricardo. They harvested 80 bags of corn and sold all but the bag pictured. When asked for how long this would feed the recently married couple of nine months, Daring giggled, “for a long time.” “At least through the end of the year,” added Ricardo.

Many farmers like Byron, Francisco, and Ricardo have turned to our Fortaleza F3 seed because it is affordable, resistant to droughts, has good yields, and makes delicious tortillas. And with credit to Nelson’s hard work and commitment, they are staying afloat, on this side of the river, in the aftermath of two hurricanes and a pandemic.